The majority of surveys that IntelliSurvey programs and hosts are on behalf of end clients, so the resulting data is not ours to use and/or publish. However, we do have a research team that periodically conducts its own surveys, and we thought we’d share some results from a study we recently conducted on a wide range of food-related topics.

A recent online survey conducted by IntelliSurvey in September 2018 among more than 1,000 adult food lovers in the US revealed some noteworthy results on a relatively new subject:  Lab-based meat.  Unlike some of the new plant-based meats on the market, this type of meat is actual meat grown from in vitro animals’ cell culture rather than slaughtered animals.  Proponents of lab-based meat cite animal welfare, reduction of greenhouse gas emissions, and decreased chance for food-borne illnesses as some of its advantages over traditional meat.

When asked how willing they’d be to try this type of meat, more than twice as many of those in the age 18-34 cohort vs. those age 55+ indicated that they probably or definitely would try it (57% vs. 26%).  Conversely, a significantly higher 44% of those 55+ said that they probably would not or definitely would not be willing to try this lab-created product, compared to 26% of those under age 35. 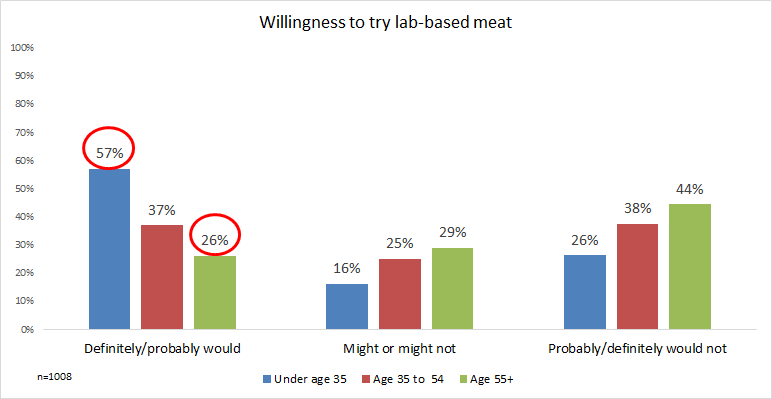 Regardless of age, the most common reason for reluctance to try lab-created meat is the perception that it is unnatural or not ‘real’ meat. As one respondent put it, “I want something natural, not something brewed in a lab.”  Another barrier to trial is related to health and safety concerns: “I feel that it’s not safe and can cause harm to your body in the long run.” Consumers are also skeptical that the product would be appetizing: “That just does not sound right and it does not sound appetizing.”

What’s in a name?

Until recently, lab-based meat was also often known as ‘clean meat’. However, at a recent industry conference, a group of lab-based meat producers agreed to use the term ‘cell-based meat’ going forward.  Although this may be an attempt to prevent unfavorable comparisons with traditional meat (e.g., if lab-created meat is clean, does that imply that traditional meat is dirty?), the name change is not likely to make the product sound more appetizing to consumers. 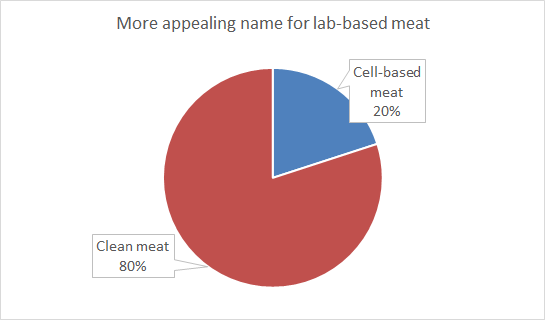 Among the 1,008 survey participants, 80% indicated that they think the term ‘clean meat’ is more appealing than ‘cell-created meat’.

The pea protein-based Beyond Burger launched nationally in the U.S. in 2013, while the wheat gluten-based Impossible Burger was introduced in 2016. Both of these veggie burgers are touted as having a taste and texture similar to actual ground beef.

However, IntelliSurvey found that the majority of food lovers who participated in the September 2018 survey were not aware of either burger, with 77% indicating that they had never heard of the Impossible Burger and 73% citing a lack of awareness of the Beyond Burger. The numbers who had either tried or regularly eat each of these burgers were quite low (7% for Impossible Burgers and 8% for Beyond Burgers). 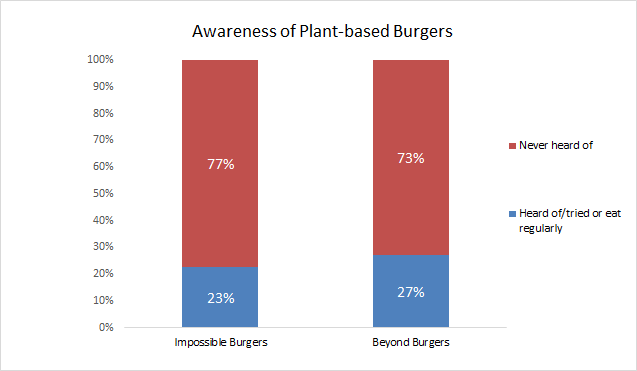 The good news for these brands is that among the small sample of those who had tried them, most liked them (61% liked the Impossible Burger and 73% the Beyond Burger).  As one Impossible Burger fan commented: “The texture is great and the flavor is amazing. This is my favorite fake meat.”  And from  proponents of Beyond Burgers: “The quality of the meat really stood out” and “They were cooked solidly like a real burger.”

To learn more, please click above and get in touch!