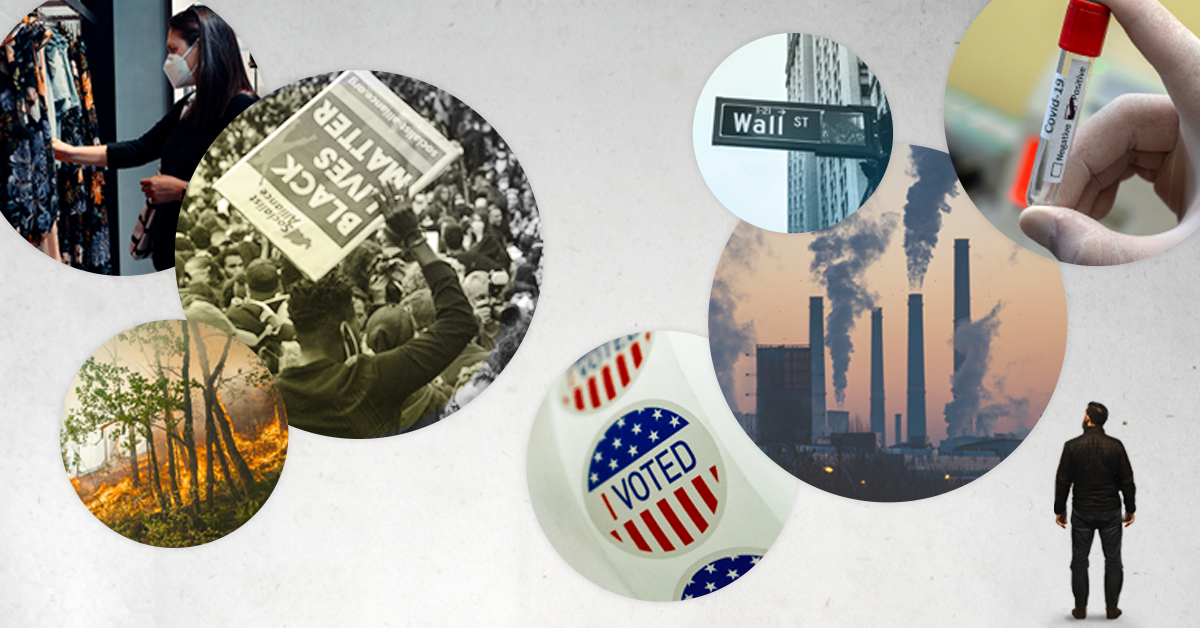 It would be an understatement to say that the United States (and the rest of the world) has been and continues to be confronted with unprecedented challenges in 2020. The emergence of the COVID-19 pandemic, the economy’s worst quarter on record (Q2), protests about systemic racism erupting across the country, climate change manifested as record-breaking wildfires in the West and severe hurricanes in the Southeast, have all caused people to wonder “What’s next?” Add to that a rapidly-approaching and contentious presidential election that is polarizing the nation, and it’s no wonder that all of this is taking a toll on many Americans. Which of these, though, weighs most heavily on people’s minds?

IntelliSurvey’s most recent ‘Life in the Time of COVID-19’ survey, fielded in the US from September 18-24, 2020 among 977 adults in the US, sought to uncover the answer to that question. Respondents were presented with five major areas of concern, first asked which is of most concern to them and then asked to explain why.

It should be noted that this wave of the survey was not a nationally representative sample, but instead was comprised of roughly equal numbers of White and Black Americans (499 and 478, respectively) in order to better allow for a comparison between the two groups.

As shown in the chart below, among all respondents, the COVID-19 pandemic, is, by far, of the greatest concern, with more than 4 in 10 (43%) selecting this option. This is followed distantly by the economy (19%), the upcoming Presidential election (16%), systemic racism (12%), and climate change (5%).  Somewhat surprisingly, 5% of respondents indicated that none of these are areas of concern.

However, when the results to this question are examined by race, significant differences can be seen between White and Black respondents. As seen in the following chart, although the COVID-19 pandemic is the most common concern among both groups, a significantly higher percent of Blacks than Whites cite it as their biggest concern (46% vs. 40%, respectively). This result reflects the fact that Black Americans have been disproportionately affected by the COVID-19 pandemic; Black Americans represent about 13% of the US population, but roughly 22% of COVID-19 deaths.

Reasons for selecting the area of most concern

After selecting their major concern, respondents were asked, in an optional question, to explain why they made their selection. The following are some of the respondents’ verbatim explanations for each issue. Note that the concerns are presented in the order cited by the total respondent base.

Concerns and worries are not in short supply this year, and as per a recent Kaiser Family Foundation national tracking poll conducted in mid-July: “…53% of adults in the United States reported that their mental health has been negatively impacted due to worry and stress over the coronavirus… Many adults are also reporting specific negative impacts on their mental health and well being, such as difficulty sleeping (36%) or eating (32%), increases in alcohol consumption or substance use (12%), and worsening chronic conditions (12%) due to worry and stress over the coronavirus.” A Medical News Today Newsletter article indicates that “Racism, or discrimination based on race or ethnicity, is a key contributing factor in the onset of disease. It is also responsible for increasing disparities in physical and mental health among Black, Indigenous, and people of color (BIPOC).

For tips on coping with stress during these trying times, see the CDC’s article on Coping with Stress.

To learn more, please click above and get in touch!