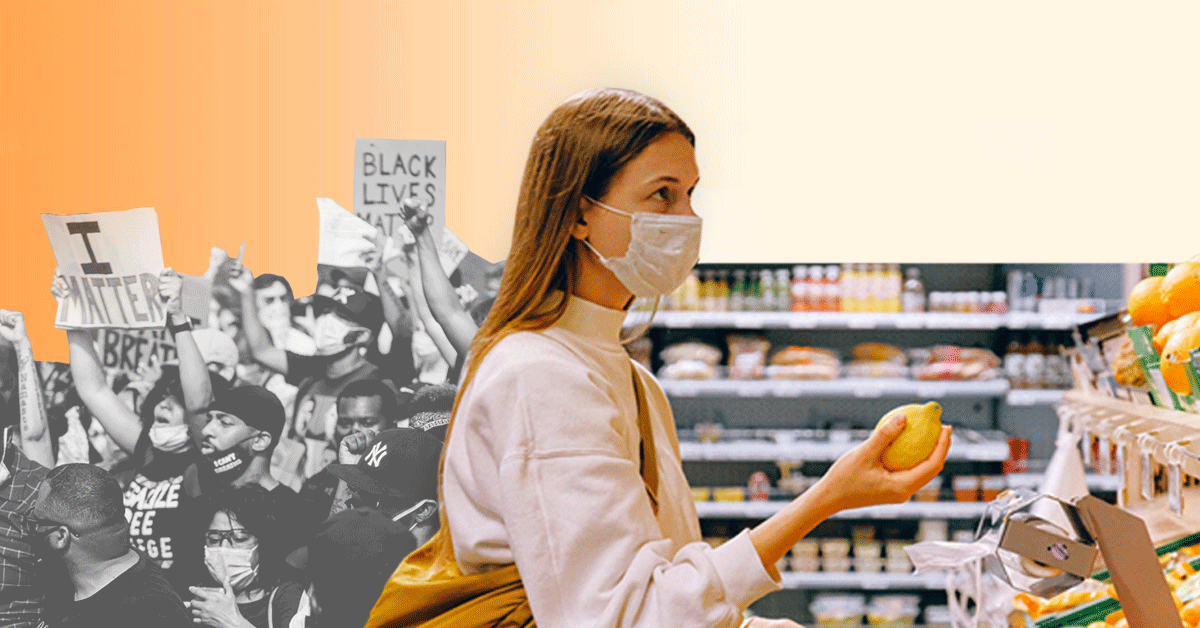 According to the Centers for Disease Control (CDC), the first US cases of non-travel-related COVID-19 were confirmed in late February 2020. Five months later, many states are still struggling to contain the virus, and as of this week, more than 150,000 Americans have died from this highly infectious disease.

IntelliSurvey’s most recent ‘Life in the Time of COVID-19’ survey, which was fielded in the US on July 24, 2020, explored the attitudes and behaviors of a nationally representative sample of 997 Americans. Topics covered include likelihood to get vaccinated against COVID-19 when a vaccine becomes available, adherence to safety precautions such as mask wearing and social distancing, and attitudes about the causes of recent surges and how these surges can be reduced.

The Good News: Most Adhering to Safety Precautions

When asked how frequently they follow safety precautions to avoid catching or spreading the COVID-19 virus, 92% of participants report that they engage in social distancing always or most of the time, and 90% wear face masks or coverings with the same frequency. As shown in the following chart, the majority also believe that they will have to continue observing these measures for quite some time: Eighty-two percent anticipate having to continue social distancing and mask-wearing for several months or more than several months.

Fewer Likely to Get Vaccinated

As National Institute of Allergy and Infectious Diseases (NIAID) Director Anthony Fauci has said, “Although face coverings, physical distancing and proper isolation and quarantine of infected individuals and contacts can help us mitigate SARS-CoV-2 spread, we urgently need a safe and effective preventive vaccine to ultimately control this pandemic.” This week, a Phase 3 clinical trial for such a vaccine has begun. In order for a vaccine to control the spread of COVID-19, a very high percentage of the population will need to get vaccinated.  However, given the rapid pace at which a vaccine is being developed, some Americans are concerned that the vaccine may not be safe or effective and are reticent to get vaccinated.

In the July 24 survey, participants were asked how likely they would be to get a COVID-19 vaccine in the first few months that it is widely available. Almost two-thirds of participants (63%) answered affirmatively, with nearly 4 out of 10 participants (39%) indicating that they definitely will get a vaccine, and another 24% reporting that they probably will get a vaccine. While 63% likely to get the vaccine may seem like a large percentage, Dr. Fauci told CNN last month that it is unlikely that a COVID-19 vaccine with an efficacy of up to 75% that is taken by two-thirds of the population would be enough to create herd immunity against the virus.

What’s Causing the Surge in Cases?

Although the number of US COVID-19 cases declined after what was thought to be the peak of new cases in early April, in the past two months the numbers have begun to rise sharply in several states. By late June, the number of new cases in the US exceeded April’s peak rate. Opinions vary widely about what is causing this surge, but most (60%) survey participants believe it is because people are not complying with science-based guidelines such as social distancing and wearing face coverings. More than half (54%) believe that younger people, specifically, are not adhering to these guidelines, while 51% think that it is not just younger people, but all ages who aren’t complying. As shown in the following chart, other causes include protests and/or public gatherings, a poor response by the federal government, and confusing or conflicting guidance from health experts and government officials. Three percent of those surveyed don’t believe that there has been a surge in cases and instead think that it is a hoax.

How to Reduce the Spread?

The most common recommendation (55%) is for states with surges to individually roll back some of their business re-openings, such as bars, gyms, and indoor dining. Similar numbers of participants also believe that there should be a nationwide mandate and/or individual state mandates regarding the use of face coverings. Restricting the travel of residents in surging states and not re-opening schools until the surges diminish are also popular suggestions. It should be noted that 6% of respondents don’t believe that any of the aforementioned actions should be taken because the surges will go away on their own.

The total number of confirmed COVID-19 cases worldwide now exceeds 16 million, with the United States having the dubious distinction of ‘leading’ all other countries in both the highest number of identified COVID-19 cases (currently over 4 million) and also the highest number of deaths (currently over 150,000). There is widespread consensus among health experts, as well as our respondents, that the virus is not a hoax and will not go away on its own. In order to control the spread of this disease, science-based guidelines must not only be established, but widely followed. It is encouraging that most Americans report that they are adhering to safety protocols such as social distancing and wearing face coverings or masks. Less encouraging is the number of people who intend to get vaccinated once a vaccine is available. All Americans are urged to stay informed and up-to-date about CDC guidelines, as well as NIH information about vaccine trials.